The HCV nest box project has been running for 8 years now and has 52 nest boxes in place.

The target bird species for the nest box project are currently the great tit and blue tit.  There is scope to expand this to birds that nest in open boxes but serious thought has to be given to any increase in scope due to the threat from predators such as grey squirrels and corvids (carrion crows, magpies and jays).

There may be opportunities to look at bat, owl and open fronted boxes but these are for the future.  The immediate focus is on maintaining the stock of nest boxes in place and improving the siting and spread of the boxes to optimise nesting opportunities for the target species.

The objective of the project is to create the optimum number of secure nest sites for the resident blue tit and great tit populations.

Therefore, the correct siting of well-spaced nest boxes throughout the available woodland, with varying hole sizes, can provide both species with secure nesting opportunities that otherwise might not exist.

Great tits breed in a range of wooded habitats, usually broadleaved deciduous woodland, at a density of about one pair per two acres of suitable habitat.  They are less agile than the smaller blue tit and tend to feed lower down the tree canopy. That is why you often see them foraging at around eye level and lower.

Blue tits breed in the same habitats as the great tit, but are particularly fond of oak woods which can supply large volumes of caterpillars to feed their young.  They breed at about a density of one pair per acre in suitable habitat.

The hole size of our nest boxes is key to ensuring that the blue tits are not out-competed for nest boxes.  The great tit will out-compete the blue tit where natural nest sites are limited, whereas a blue tit can use both a 20mm and a 25mm nest box hole.  Great Tits, being a larger bird, can only comfortably access the 25mm nest box holes.   This enables the density of nest boxes to be optimised by pairing nest boxes with different hole sizes in the same areas, as although each species is territorial, they are only territorial to other pairs of the same species.  So, in a two acre block of prime oak woodland you could, in theory, have two pairs of blue tits and one pair of great tits nesting.

Each year the Hamble Conservation Volunteers visit each of the existing Hamble Common nest boxes to give them a quick spring clean, remove and replace any damaged boxes and assess whether the box has been nested in and by which species.  This last piece of information can be established by examining the nesting material and any remaining egg shells.  Blue tits nearly always use feathers to line their nest but great tits rarely do this, which helps give a clear indicator of the species using the box, as does the nest box hole size and any recorded observations of the occupants going in and out.

On average we believe that around 75% of our nest boxes are used for nesting or shelter each year.

The boxes were designed and are made by the Volunteers and have a protective plate around the hole donated by GE Avionics.  This protection is needed to stop predators enlarging the nest box hole and stealing the eggs or nestlings.  Great spotted woodpeckers seem particularly keen on this method but they have been thwarted by this particular addition to the wooden boxes.

However, the arms race continues and the woodpeckers seem to have in some cases changed their point of attack to other points on the front of the boxes.  Luckily it takes several visits and sustained “drilling” to break through the wall of the box.  It may be that the woodpecker can hear the hungry chicks inside and this encourages them to try a different point of entry.  However, instinctively, they still go for the nest box hole which is protected by a metal or Perspex plate.  It is important to remove any damaged or rotting nest boxes during the maintenance program to deny predators an easy target.

The small areas of woodland around the edges of the Common have healthy populations of both great and blue tits and we would like to think this is down in some small part to the continuing efforts of the Hamble Conservation Volunteers to provide secure nest boxes each year. 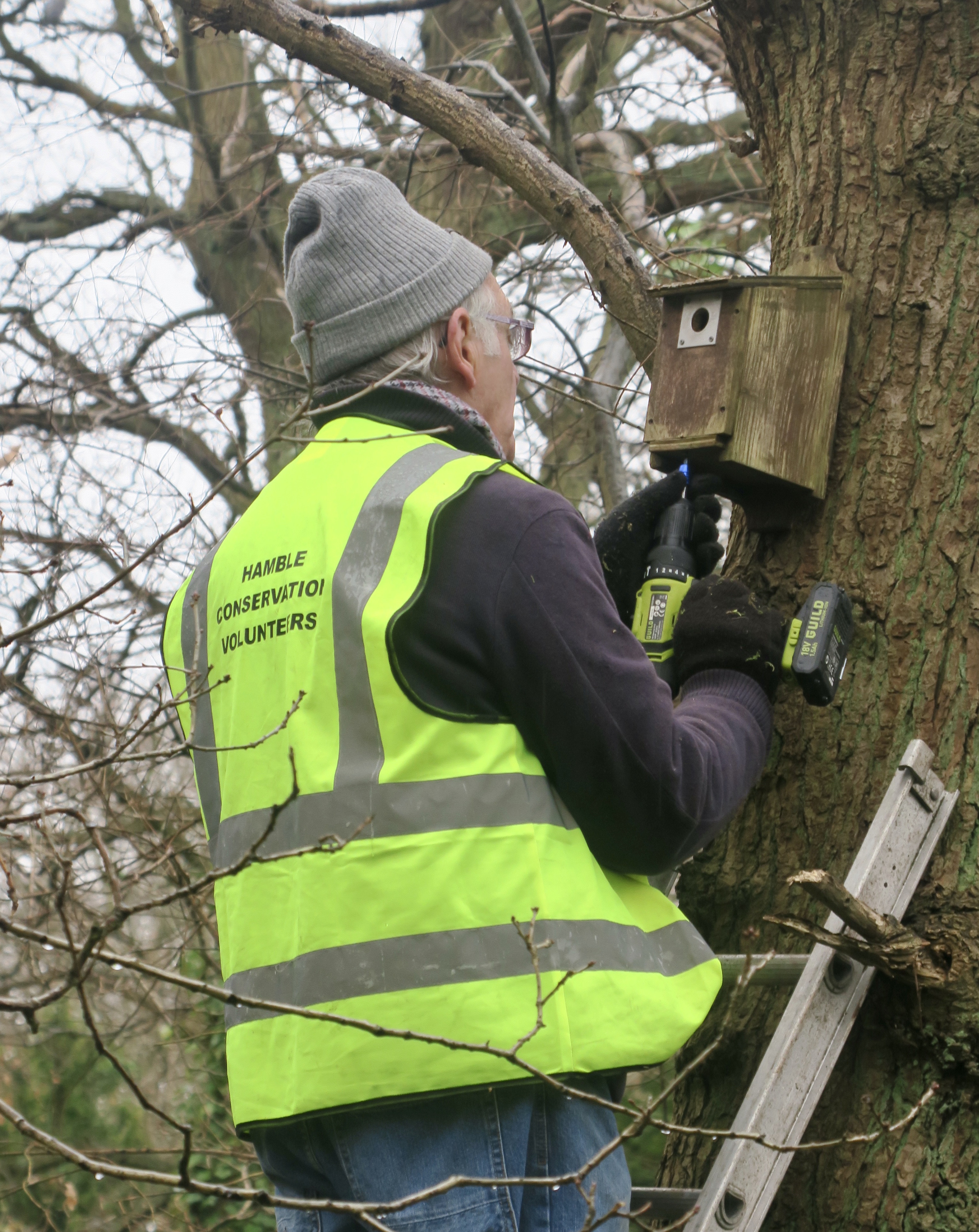